A new sector is born

The brief new it is that the neighbors in this ocasion can be integrated in the Gaiata, this new sector starts this year and it is to integrate the people to our Castellon’s Parties these have been celebrated since more than six centuries.

We are not going to pretend in this initial periodical informative paper to arrive to all of you in this new sector because it is a difficult chance, but we are trying to show you our questions we have, we show you what, when, where and why are our Castellon’s parties. These is not easy in any way we know that most of you knew the story about our Magdalena so we are going to pretend to iniciate you to our habits which probably it will be the same, the first moment you saw the first lights of a Gaiata, the mediterranean, all about our town, Castellon.

But it is a new, which is the birth of a new comission of the new sector, definitively it is to show you and orientated to our old traditional parties which is for example the Magdalena. It is a new because since the parties of the Magdalena started from the hands of those men that had a good vision of the future in the 1944 th and they start them with the mayor D. Benjamin Fabregat, who was a good “castellonero”, he created the “Prego de Festes”, he was the person that brought the traditions to us also with D. Manuel Segarra Ribes . The party is not that different from years ago, it is clear that now the city is different from the postward period but the traditions of this party it is the same.

The truth it is that as the town had grown up so fast these party “Magdalena” it was made for a little ones those that lived in a hugh and important place or street next to the center of the town. This year we start to try to change this, because we want this party for all the “castellonenses”, we want to give a chance to everybody that wants to participate because this is a town party for all town’s people.

That is why the Comission of the 15 th gaiata was born, the nice number for all the players, we hope the number help us to do it great. In this comission there are persons that have been in this party for many years and they have a lot of experience to work for that we want. You will know them.

But maybe the most important new is the fact that it is the first time in our party’s history that a brave woman a young but with many years working to do the best in our party is in the comission, we hope that more woman as her come to help in this comission.

We pretend to start the project with a open doors policy, so in any moment and in any case all neighbours can know who are the things going in our sector “Sequiol” and they can participate if they want in a direct way in all our departments (we love that there were more people implicated in this). The comission don’ t have to many people working on it so we need a little bit of help, so when we finish it we can be satisface, because we have done the best of us.

This is a brief sintex about our “temporada gaiatera”, all the efforts from everybody can make born a new stage for this new sector that stars now which is “El sector del Sequiol”.

Your support and your colaboration is very important for this project.

Why of a name and Why of a symbol

As a new born, our sector had to find its identity signs to show that to the rest of the people in a meeting and this is only made to work for this party which is “La Magdalena”, our most important and traditional party in our town .

We had to think just a little because the people to work in it they were asking for it long time ago,that is why this sector was made quikly.

The name of the sector is the name of our placement which is always called Sequiol, that is the reason of the name. It was also because of the soccer field that desapeared in this sector that is why of the name also.

Because, although it was happened more than 20 years ago the old field let us great moments to all of us, the most representative it was that when they took that it was built a place for the teaching, first it was a place to form new teachers and now it is a primary and secondary school.
We are not against the teachment obviously, but before there were a lot of schools and only two soccer fields and when they took us this one we cried. The Sequiol it was a place where the water run to take it to the places such as the oranges trees,and lots of times we went there to celebrate a victory.

Ok that is where we find the name but what about our symbol??

Here there was not a big deal because it was only for this sector where the “Panderola” train used to go through Castellon and it was coming through our sector. All days came through our sector around the 1889. Thanks to the Panderola all the places such us Almazora, Vila·real, Burriana and Onda where communicated to Castellon.

That it is why one afternoon in our sector in the 1963 said bye to the Panderola, we said bye crying because it was a great machine, all plenty of emotions for lots of people that used to used it so much. The youngest don’t remember this, because the did not even so the Panderola run in the streets, nowadays the Panderola it is in different squares as a history monument. La Panderola is our symbol of all the castelloneros and that is why this sector want it to have ir as a symbol.

The ones that are not from Castellon and the ones that never knew anything about the Panderola maybe will know more about this train machine because of our information pages. Most of this it is written in the first “Llibret of the Magdalena in 1982”

That is in a brief way the exposition of the wishes we want to work in this next year. To work together and to make a new stage for our sector which is right now “El sector del Sequiol”. Your collaboration and your comprehension are going to be very important for us.

As a new project the new sector had to find some identity signs to show you all the events we are preparing and all the things we are going to do for our “Magdalena” our most traditional party, we want that all the traditions come back and we want to try to do our best for this. 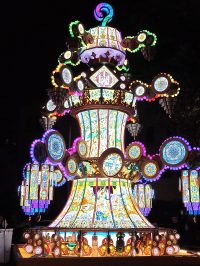